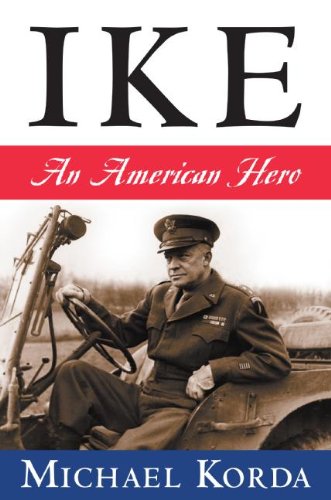 Characterizing Dwight Eisenhower as an American with a “big grin” and “long-limbed, loose American way of walking,” this smitten biography demonstrates his heroism by dwelling on his World War II record as commander of Allied armies in Europe. Korda ( ) defends “the people's general” against criticisms leveled by subordinates and historians (Eisenhower's presidency flits by in an admiring 64 pages), but for all his fulsome comparisons of Eisenhower to Napoleon and Grant, the author's case is weak. Korda's approving gloss on Ike's “broad front” approach—directing “all the Allied armies to engage the enemy at every point... until superior numbers inevitably ground the Germans down” because “he did not think a single, clever stroke would do it”—makes Eisenhower sound like a terrible strategist. At best, Ike comes off as a competent diplomat-in-arms, enabling egomaniacs like Churchill, De Gaulle, Montgomery and Patton to cooperate, and soothing wife Mamie's anxieties over his glamorous secretary. Unfortunately, Eisenhower's self-effacing affability in this role means his story is usually upstaged by the colorful prima donnas around him. A more critical analysis might have made for a more interesting biography. Photos.