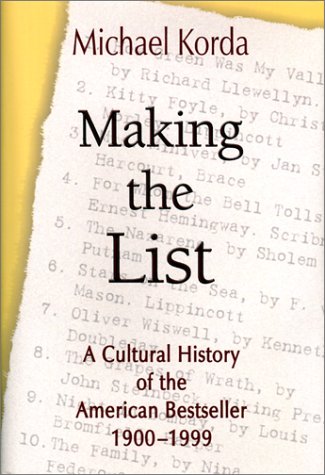 MAKING THE LIST: A Cultural History of the American Bestseller 1900–1999

According to Korda (, etc.), it was only in 1895 that someone—Harry Thurston Peck of the—published the first bestseller list, and that listed only fiction. ran the first nonfiction list 17 years later. Today, bestseller lists galvanize the publishing industry, much as their cousins do the film and recording industries, among others. Of the several books written about bestseller lists (most notably, Alice Payne Hackett and James Henry Burke's , 1977), this is the most perceptive and—not surprisingly, given Korda's literary abilities, which have led to his own run of bestselling books—the most engaging. The engagement arises from Korda's erudite yet conversational tone, leavened with humor and smartly opinionated (e.g., the 1958 nonfiction bestseller list, he writes, "remained the kind of thumping, predictable bore it had been through most of the fifties"). The perceptivity arises not only because Korda, longtime editor in chief of S&S, knows just about all that's worth knowing about books, but because he approaches the lists as the subtitle indicates. Decade by decade, he examines the annual hardcover lists—drawn from beginning with 1913—to see how the books people buy embody the cultural tenor of the times. "Like a mirror," he writes, "[the list] reflects who we are, what we want, what interests us...." Korda finds, for instance, that "[books about] better sex, more sex, plus tabletop cooking, says something about the priorities of Americans in the first year of Richard Nixon's presidency.... People were looking for domestic happiness, in retreat from the... conflicts of the sixties.... " As Korda charts changes in America via the bestseller list, he demonstrates that reading tastes haven't altered all that much; as background to that charting, he presents a useful, compact history of the publishing industry. Witty and deeply informed, this is a bracing, even essential, read for anyone who loves books.