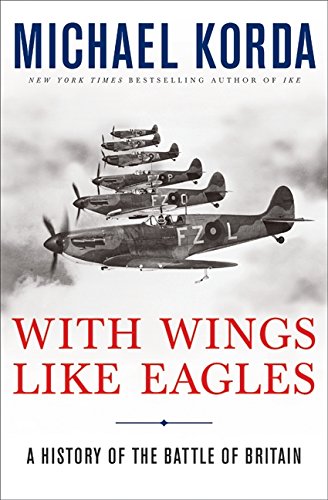 With Wings Like Eagles: A History of the Battle of Britain

The Battle of Britain has become as much myth as history. Korda ( ), former editor-in-chief of Simon & Schuster, gives its story fresh life with the expertise of an established popular historian and the polish of a master narrator. In the summer of 1940, Britain stood alone against the Third Reich, which had quickly overrun Western Europe and seemed poised to finish the job. All that blocked the Nazis were a couple of thousand fighter pilots and their commander, Air Chief Marshal Sir Hugh Dowding, the story's hero. Dowding fought to build Spitfires and Hurricanes, and trained men to fly them. He set up the radar system and the observer networks that kept watch for German raids. In the face of initial defeats, he husbanded his resources for a greater battle he knew would come. Korda is no triumphalist, demonstrating the mistakes, misunderstandings and simple cussedness that threatened the chances for a British victory. But Dowding's Brylcreem Boys, nicknamed for their favorite styling gel, succeeded against an enemy no less brave and skilled. 7 pages of color and 16 pages of b&w photos.