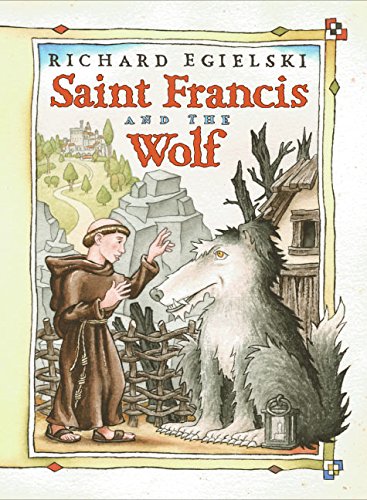 Saint Francis and the Wolf

Long before Doctor Dolittle came along, Saint Francis of Assisi was known to have a special talent for soothing even the most savage beast. In this sharp and lively picture book, Egielski ( ) recreates the oft-told tale of the friar's taming of a wicked wolf that terrorized the Italian town of Gubbio in the 13th century. Though no knight, army or "great war machine" can stop the violent creature, Saint Francis' gentle words urging the wolf to make peace do the trick. Crisp, frame-like borders surround Egielski's scenes, which brim with medieval accoutrements and light, humorous details (i.e., the wolf uses a jousting spear as a toothpick after noshing on a knight). The overall effect—heightened by a typeface that resembles hand lettering—will have readers imagining they are flipping through a scrapbook or ancient volume. This inviting and entertaining homage to the saint will be welcome on many a family bookshelf. All ages.