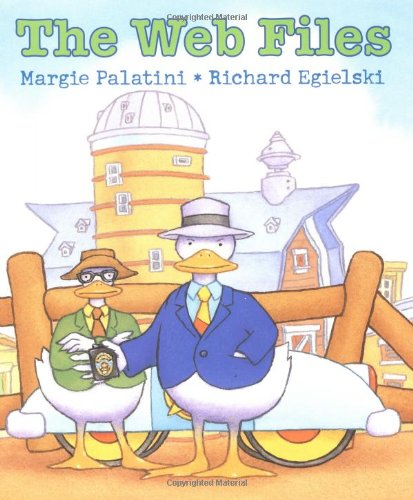 This punny parody freely alludes to the TV drama , as two "ducktectives" attempt to "quack the case" of several robberies on a farm. Each scene opens with a time of day and location, noted in hard-boiled bold print. A blotchy typewriter font suggests the gruff voice of Ducktective Web, a white-feathered, fedora-capped "flatfoot." Web reports that a chicken's "peck of... perfect purple almost-pickled peppers" has been stolen, a sheep is missing some lettuce and Little Boy Blue has an alibi (oddly, potential pepper-pincher Peter Piper goes unmentioned). Headquarters swarms with storybook characters: "A miss named Muffet had just been tossed off her tuffet and a gal named Peep was missing some sheep. I noticed that three little kittens had lost their mittens. They began to cry." Ultimately, in a rather anticlimactic finale, a "dirty rat" (literally) gets the rap. Egielski (; ) sets the police drama in a spotless barnyard, where a "wanted" poster pictures a wolf, and three blind mice lodge a complaint about their bandaged behinds. The illustrator's bright sky-blues and straw-golds counteract the claustrophobic, mock-tough narration. From the intermittent "dum de dum dum" sound effect to the catch-phrase "Book him, Ducko," Palatini () mimics classic detective television and adds a nursery-rhyme twist. But the gags may be best appreciated by an adult audience. Ages 4-7.