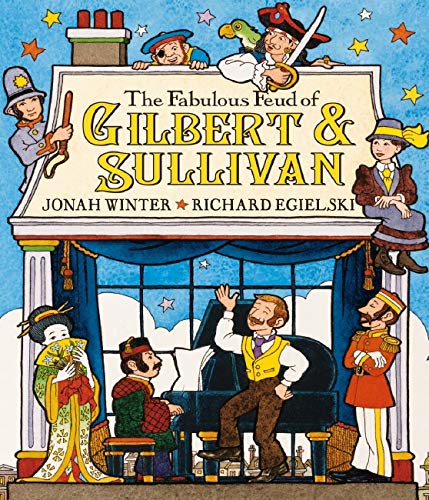 The Fabulous Feud of Gilbert & Sullivan

Covering much of the same ground as Mike Lee's marvelous 1999 biopic (with a G-rated filter, of course), Winter ( ) and Egielski ( ) present the backstory of . The storytelling gets off to a slow start; Winter first lets readers know that “jolly old England was not so jolly” (an early spread includes a Dickensian scene of a workhouse), then gives a somewhat tortured explanation of “topsy-turvy” that will confuse children unfamiliar with the pair's oeuvre (fans, on the other hand, may not appreciate the subtle dissing of and other works). It's only at midpoint that the narrative gains any momentum, as Gilbert's Japanese-fueled inspiration persuades Sullivan to collaborate on the work that will become their masterpiece. Unfortunately, Egielski's pictures never take flight; while his textured watercolors feel theatrical and he dutifully incorporates the ornate detailing and eccentricities of Victorian life, the images remain flat. Ages 4–8.