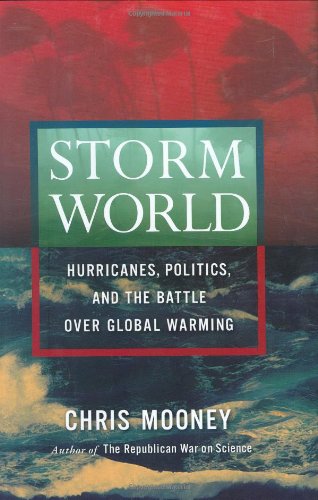 Storm World: Hurricanes, Politics, and the Battle over Global Warming

aving witnessed Katrina’s devastation of his mother’s New Orleans house, science writer Mooney ( ) became concerned that government policy still ignored worst-case scenarios in planning for the future, despite that unprecedented disaster. He set out to explore the question of “whether global warming will strengthen or otherwise change hurricanes in general, even if it can’t explain the absolute existence, attributes, or behavior of any single one of them.” Since storm research’s early 19th-century inception, Mooney found, there has been a split between those who believed the field “should be rooted in the careful collection of data and observations” (e.g., weathermen) and those who preferred “theory-based deductions from the laws of physics” (e.g., climatologists). Whirling around this longstanding antagonism is a mix of politics, personalities and the drama of these frightening storms. The urgency and difficulty of resolving the question of global warming’s existence, and its relationship to storms, has only heated things up. Mooney turns this complicated stew into a page-turner, making the science accessible to the general reader, vividly portraying the scientists and relating new discoveries while scientists and politicians change sides—or stubbornly ignore new evidence. Mooney draws hope from some researchers’ integration of both research methods and concludes that to be effective, scientists need to be clear communicators.