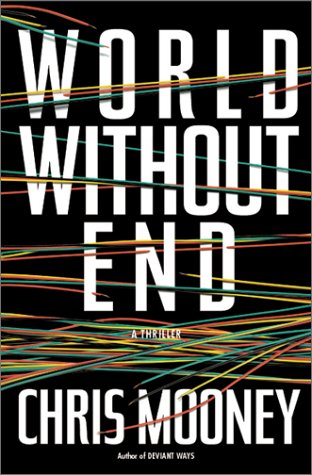 You can't keep track of the psychopaths without a scorecard in Mooney's second nonstop action thriller (after ). There's Amon Faust, aka Angel Eyes, a semibenevolent terrorist with a germ fetish, who just wants to cleanse the world and start again, but isn't above taking abrupt personal action against an annoying cell phone user. There's Jonathan Cole, a rogue intelligence agent who likes to bite people's ears off. There's Raymond Bouchard, who looks like a powerful Hollywood agent, but really runs a top secret CIA unit called IWAC (Information War Analysis Center) and might just be a Russian mole like Aldrich Ames or Robert Hansen. And there's Misha, a "densely packed three-hundred-pound animal" who is one of the Red Mafiya's most feared enforcers and once "made a woman eat a bowl of what he called homemade Grape-nuts: small rocks and sand mixed with milk." Slightly more sane is hero Steve Conway, an IWAC team leader based in Austin, Tex., where Angel Eyes (or somebody else) is trying to steal the prototype for a neat new invention: an optical camouflage suit that makes the wearer invisible. Equipped with a special Palm Pilot to die for, Conway tries to keep the suit from falling into the wrong hands. Mooney's writing is occasionally clumpy ("He could feel his anger building, the way a car slowly warms up on a frigid New England winter morning"), but his imagination leaves nothing to be desired.