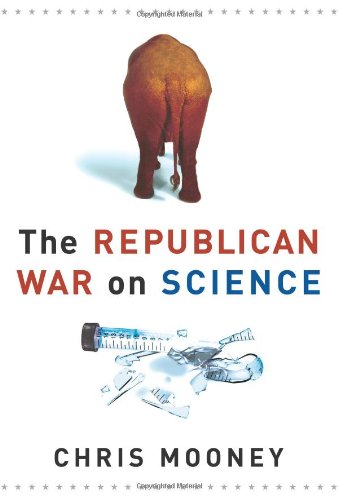 The Republican War on Science

Does the Bush administration ignore or deny mainstream research to please its conservative base? Have business groups and certain religious lobbies helped it do so? Does Bush-era treatment of scientists differ from that of Clinton, George H.W. Bush and Reagan? Has a Republican Congress passed laws designed to disable clean air and water efforts, and has it dismantled safeguards, such as the Congressional Office of Technology Assessment, meant to give legislators unbiased advice?

Mooney's passionate, thoroughly researched volume answers these questions with an urgent "yes." A former writer who is making his book debut, Mooney uses interviews and old-fashioned document-digging to explain how, over two decades, right-wing politicians built institutions designed to discredit working scientists; how some energy companies have allied themselves with powerful Republicans (such as Sen. James Inhofe of Oklahoma) to block or reverse U.S. steps to curb global warming; and how the present administration defies expert consensus on climate change, on mercury pollution, even on how to read statistics. Mooney tracks Bush White House efforts to spread misinformation about stem cells; the work of religious right regulators like Dr. David Hager (formerly on the FDA's Reproductive Health Drugs advisory committee) in restricting access to birth control; and the attempts of the Discovery Institute (and other think tanks linked to the Bush base) to fight the teaching of evolution.

In the past five years, Mooney documents, many formerly apolitical physicists, biologists and doctors have come to believe there is a "pattern" of science abuse under Bush, a push back against the methods of science itself. Conservatives may react with indignation; liberals, moderates and working scientists will find few surprises,but Mooney's very readable, and understandably partisan, volume is the first to put the whole story, thoroughly documented, in one place.