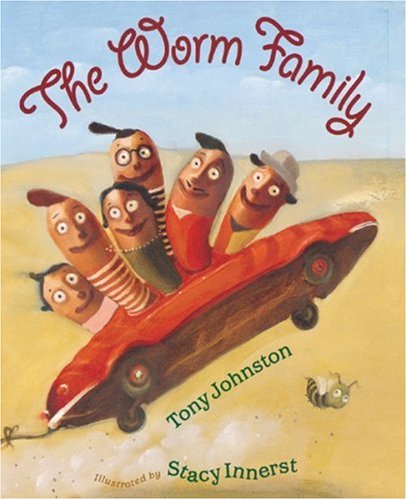 "Rejoice in who you are! Rejoice in who everyone else is!" trumpets this uplifting tale of a dauntless Worm family. Seven Worms, all "highly skinny and squiggly and long," love each other but are chased from every place they set up housekeeping. Buggy neighbors, some aphids "bulgy and squat and green as leaves" and caterpillars "glossy and bossy and striped like mints," react with horror when the Worms move in. Each time, the Worms slide into their carrot-shaped car and search for greener pastures. Even though they sing a confident refrain ("We are Worms and we are proud!/ We are long and we are !"), they soon find it hard to keep their chins up: " 'We don't have chins,' said Blanche./ 'Never mind,' said Mother, 'pretend.' " The Worms' chestnut-brown skin and dark hair, predilection for jazz and beat poetry, and attempted migration forge analogies between them and subordinated racial and ethnic groups. Nothing so obvious is stated, though; readers of Johnston's and the bilingual can draw their own conclusions. Innerst's ( ) antic oil paintings, which picture the Worms standing tall like fingers or curling in graceful esses, recall Barry Root's rocking and reeling imagery for , another spirited tale of self-actualization. Ultimately the worms stake a claim ("The worm stops !" shouts Uncle Herm) and make some friends. Johnston and Innerst don't claim the Worms' troubles are over, but they show the amiable family's unity and imply the irrationality of prejudice. Ages 3-7.