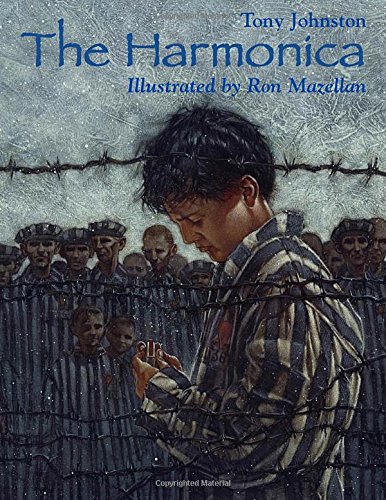 Set in WWII Poland and inspired by a true story of a Jewish family, Johnston's ( ) stirring tale opens on a wistful note: "I cannot remember/ my father's face,/ or my mother's,/ but I remember their love,/ warm and enfolding/ as a song." Mazellan's lifelike, earth-toned mixed-media paintings reveal a boy and his parents, first huddled together over a book, then singing together, then listening to the music of Schubert coming from a neighbor's gramophone. When his father returns from his job in a coal mine with a harmonica and gives it to the boy, his son practices on it until he can play Schubert. Meanwhile, "Somewhere outside, a war/ was raging. But it was far away—/ a bad dream—leaving us untouched." But not for long. The tenor of the narrative changes abruptly as Mazellan depicts Nazi soldiers banging on the door; the family is separated and the boy is sent to a concentration camp. When the commandant insists the lad play his harmonica for him each night, the boy cannot imagine how someone so cruel could appreciate the beauty of Schubert's music and is disgusted to perform it for him. But he finds solace in the realization that his playing also reaches his fellow prisoners, "who might hear the notes/ and be lifted, like flights/ of birds." The illustrator makes an affecting children's book debut, choosing images that communicate the story's pathos while sparing the audience many of the setting's horrors. Ages 6-11.