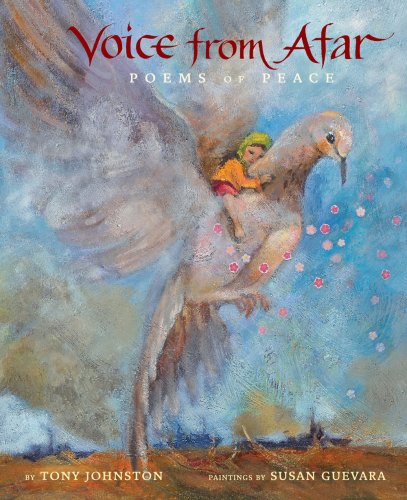 Voice from Afar: Poems of Peace

Guevara's ( ) gentle acrylics temper 26 poems about war by Johnston ( , reviewed above), whose imagery pulls no punches. Many of her poems are set squarely in the middle of combat, addressing victims (“Child on the other side of the world.../ I am calling”) or describing their surroundings. The poet sharply invokes the products of war: poverty (of a dog: “His ribs are the slats of a small ark”), violence (“The body remains,/ crumpled in the street”) and grief. Guevara, painting on rough canvas, declines to show the most frightening scenes. Instead of the child on the other side of the world “in your little torn shirt,” she paints a small girl clinging to the back of a flying dove; instead of the crumpled body, she paints an angel. Quick brushstrokes and pastel shades soften the blow, and the images register as memories or dreams. The final poems pray for peace, but Johnston's sobering portraits make forgiveness unexpectedly difficult to imagine. Ages 10–up.