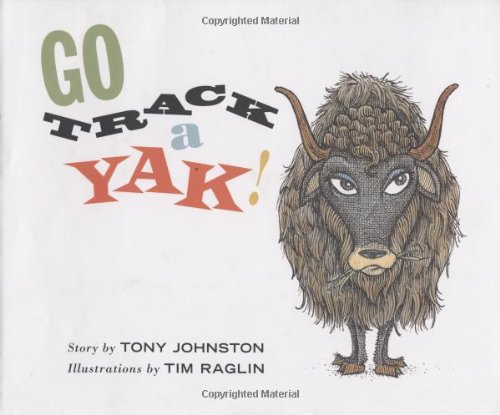 Two fretful peasants, who wail "Boo-hoo-hoo!" when their baby stops eating, get the title's advice from a broomstick-riding crone. "The secret is—yak juice! Only that will save the brat," the toothless woman says. Papa, a none-too-bright fellow with a droopy black mustache, a patched-together shearling coat and a scruffy fur hat, runs off to track a yak. Along the way, the witch points out cowlike footprints and, when Papa gets set to "whack the yak" with a giant rock, informs him, "You ninny, yak juice is yak !" Back at home, the yak and baby become friends, and when the crone reveals her ulterior motives ("Give the brat!"), the incensed animal kicks her into the mountains, "too far to ever come back." In Raglin's () tightly crosshatched pen-and-ink pictures, the yak is a dark-brown creature with tilted eyes, comically splayed feet and a placid demeanor. The weepy, unlovable humans have bulging eyes and gaping mouths, and the hook-nosed crone sports jangly gold jewelry. Raglin draws these caricatures against a snowy white background, leaving room for multiple sizes and colors of type to crowd the spreads. Johnston () builds a slapstick folktale around a serviceable title and a few stock characters, and the overdesigned pages only highlight the underdeveloped plot. Ages 5-7.