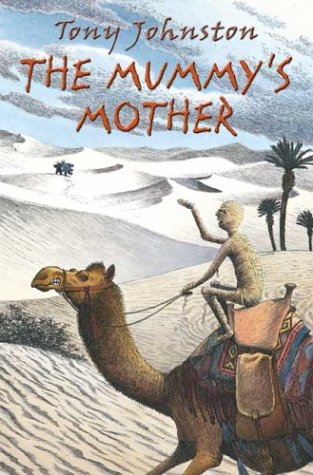 Johnston's ( ) loopy tale opens in the Egyptian desert, where Ramose, the 4000-year-old mummy of a boy who died of the plague when he was 10, listens helplessly as grave robbers steal his mummified mother from her tomb. His outrage gives Ramose the ability to move again ("without analyzing exactly how") and, determined to rescue her, he hops on the back of a camel. Remembering that one of the thieves has said, "Those museum boys are waiting in port," Ramose steers the camel toward the sea, in "hot pursuit of his mother. The hottest pursuit imaginable, for the eye of the sun glared down upon him most wickedly." Thus begins a series of misadventures, which lead Ramose and his mummy mother to Manhattan. There a talking pigeon masterminds the young mummy's liberation of his mother from the museum in which she is displayed. The 4000-year-old boy's observations of the mores of the modern world include some comical utterances, but in general Johnston overloads her narrative with groan-inducing puns and obvious wordplay (e.g., the camel and the pigeon respectively tell Ramose, "Don't get all unraveled"). Egyptology fans will likely be disappointed with the plotting, which tends to be more inane than whimsical. Ages 9-up.