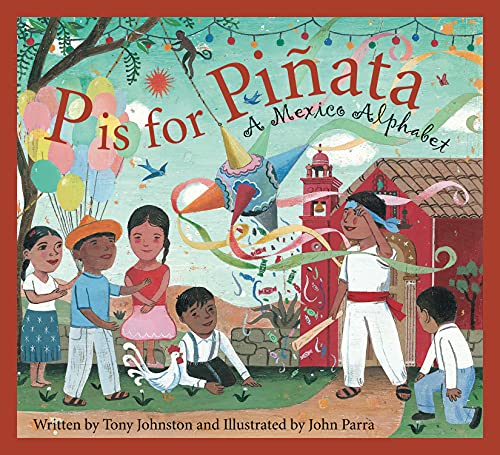 P Is for Piata: A Mexico Alphabet

Textural folk art paintings visually exude Mexico in this abecedary. Two- to four-line verses introduce topics from A to Z; wide sidebars for each are packed with interesting facts and anecdotes conveying different aspects of the nation's history, landscape, traditions and beliefs. The format is a good one, allowing readers to focus on Parra's ( ) dynamic pictures of birds (e.g., the quetzal), ancient deities, stylized landscapes, iconic figures. The text, however, can be inconsistent. A particularly sappy verse—“O is for Olympic Games/ The world went to Mexico, held hands in brotherhood,/ and for one shining moment knew peace”—is contradicted in the sidebar, which refers to the “bloody result” of a student demonstration before the games. Some verses are meaningless without the sidebar explanation: “N is for Netzahualcóyotl/ There was a golden time once/ when men lived dreams/ and poems bloomed like flowers.” The sidebars themselves, fortunately, cover a broad range, including cooking directions for prickly pears and a poem written by Netzahualcóyotl, who turns out to have been 15th-century Texcoco's answer to Leonardo da Vinci. Ages 6–10.