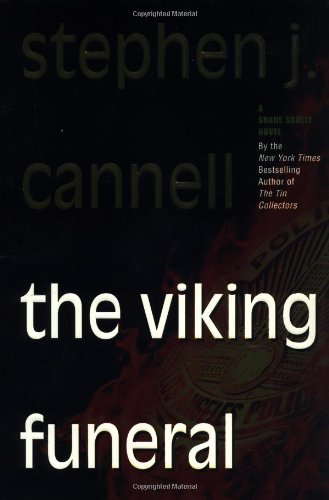 Readers willing to check their disbelief at the door will enjoy this latest over-the-top thriller by Cannell (). It's been three years since LAPD cop Shane Scully's best friend and fellow cop Jody Dean blew his brains out—so what does it mean when Shane spots Jody driving in the next lane on the freeway? Shane's lover, Alexa Hamilton, herself a star in the LAPD, is skeptical of the sighting—partly because Shane is undergoing psychiatric treatment—until they find her boss dead in a faked suicide with a strange tattoo on his ankle. The tattoo is the symbol used by the Vikings, a group of brutal rogue cops in Jody's unit who were kicked off the force. A two-way radio at Sheperd's home leads Shane to Jody's hiding place, and it turns out he's involved in a lot more than just a rogue gang. Shane stumbles into a huge money-laundering conspiracy involving the cops, Colombian drug cartels and Big Tobacco. But in order to win Jody's trust and save his own life, Shane must betray Alexa. The action intensifies as the rogues, with Shane along with them undercover, face peril trying to keep ahead of murderous drug lords while the bodies pile up. Solid plotting with nail-biting suspense and multiple surprises keep the reader guessing and sweating right up to the cinematic ending. As the creator of such TV series as and , Cannell has a knack for character and a bent for drama that will satisfy even the most jaded thrill lover.