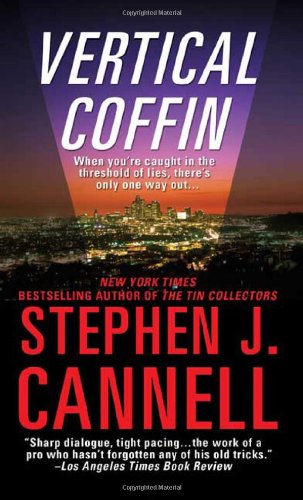 The title of the latest entry in Cannell's Shane Scully LAPD series ( ; ; ) is police jargon for any doorway, which is where cops are most vulnerable when clearing a house. As the novel begins, Shane stumbles into a full-scale barricade shootout between gunman Vincent Smiley and surrounding police. After one of two competing SWAT teams at the scene burns down the barricaded house with Smiley in it, a fight over who is to blame begins to smolder. Several subsequent cop shootings (with all victims caught in the aforementioned vertical coffins) fan the SWAT team turf tussle into a conflagration that Shane and wife Alexa, the acting head of the LAPD Detective Services Group, are assigned to investigate. Shane, an old school detective, insists on starting from zero and looking into shooter Smiley's past. Everyone else wants him to forget the gumshoe routine and come up with an instant solution. The pleasure of Cannell's work isn't in the writing ("Bullets whined and ricocheted in a deadly concert of tortured metal"), but lies more often in the interesting procedural elements ("It's very hard to protect a crime scene, so I always start at the far edges first, and work in toward the body"). Shane's still a little rough around the edges, but despite too many pop psychology musings, he's a dependable and satisfying character. Readers will enjoy watching him puzzle out the twists and turns of the plot and watch breathlessly as he undertakes a climactic high-speed chase in a souped-up dune buggy on a military shooting range.