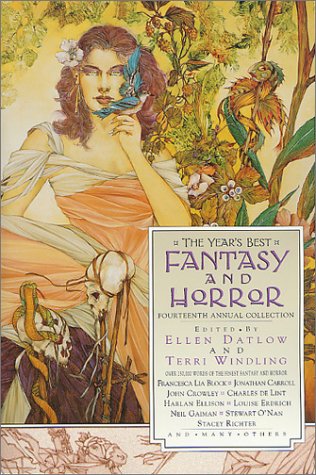 There are other annual "best" collections of fantasy and horror combined, but this long-running series of short fiction and poetry, with exhaustive summations of both fields for the year 2000, tops them all. Editors Datlow and Windling have scoured not only magazines and anthologies devoted to these genres but also general and small-press publications. So a handful of mainstream authors pop up (Louise Erdrich, Stewart O'Nan, etc.), along with a host of American and British writers familiar to genre fans (Ramsey Campbell, Harlan Ellison, Tanith Lee, Neil Gaiman, etc.). If few of the more than 50 eclectic stories and poems are outstanding, they are all worthy. More sketches than tales are Steve Resnic Tem and Melanie Tem's fantastical "The Man on the Ceiling" and Greer Gilman's poetic "Jack Daw's Pack." Jack Dann's "Marilyn" proves the film star should be given a moratorium. Fine folk tales by Erdrich, Claudia Barbosa Nogueira and Nalo Hopkinson demonstrate the value of brevity. Jack Ketchum is painfully and unusually poignant in a brief story of loss, "Gone," while Campbell satirically points up the inadequacies of specialty publishers in "No Story in It." And the late Howard Wandrei's tale of jealousy and revenge, "George Is All Right," is as creepy as they come. This anthology is an essential volume for anyone who values quality in fantasy and horror today.