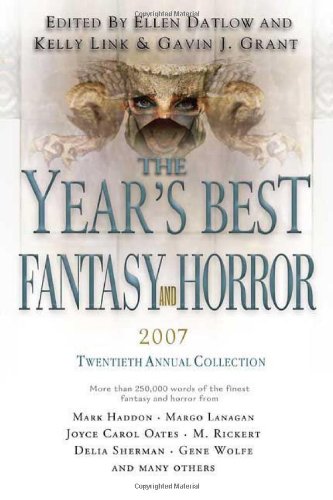 In the two decades since this venerable series was inaugurated, so many venues have begun to welcome horror and fantasy stories that these dedicated editors play a crucial role in bringing the best new works to fans who don't always read far afield. Trend spotters will note numerous ghost stories in Datlow's horror picks, including Christopher Harman's “The Last to Be Found” and Stephen Volk's “31/10,” supremely eerie exercises in the ghost-hunt-gone-bad vein, and Stephen Gallagher's “The Box” and Glen Hirshberg's “The Muldoon,” whose spooks are equal parts psychological and supernatural. Link and Grant's eclectic fantasy picks range from the haunting magical realism of Geoff Ryman's Hugo- and WFA-nominated “Pol Pot's Beautiful Daughter” to the light urban fantasy of Ellen Klages's “In the House of Seven Librarians” and Jeffrey Ford's blend of whimsy and the macabre in “The Night Whiskey.” As the line between fantasy and horror blurs, this combined presentation of their exemplars will give readers of both genres much to enjoy, and may even broaden a few horizons.