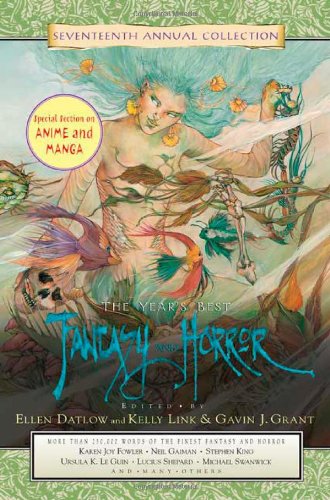 The proliferation of specialty fantasy publications with short runs and low profiles, combined with the growing pervasiveness of fantasy and horror in mainstream markets that elude genre enthusiasts, has made this annual culling increasingly vital for readers who seek the best in fantastic fiction. Datlow (the horror half) teams with new co-editors (who assume fantasy detail once handled by Terri Windling) and the series doesn't skip a beat in quality, delivering 43 stories and poems published in 2003 that illustrate modern fantasy's breadth and variety. Stephen King is represented by "Harvey's Dream," an eerie tale of a precognitive dream's disruption of an ordinary suburban household. Karen Joy Fowler, in "King Rat," and Ursula K. Le Guin, in "Woeful Tales from the Mahigul," make suffering the grist of powerful folk tales. Stories by Michael Swanwick, Neil Gaiman and Dan Chaon stretch traditional genre themes in intriguing new directions. Likewise, the one dominant theme that shapes the contents of this year's volume—the zeitgeist of a post-9/11 world—gets memorably varied treatments from several contributors. Lucius Shepard conjures ghosts from the ruins of the World Trade Center for a consoling tale of redemption in "Only Partly Here," while Brian Hodge evokes an all-consuming evil in the battlefields of Afghanistan in "With Acknowledgments to Sun Tzu." Wartime paranoia is implicit in two subtly crafted fables, M. Rickert's "Bread and Bombs" and George Saunders's "The Red Bow." Like the other selections, these stories are proof that the best fantastic fiction is modern mythmaking at its finest.