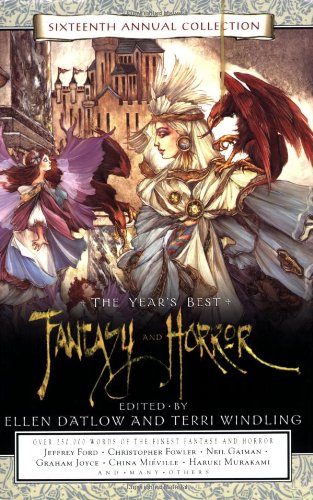 A highlight of any year's fantastic fiction yield is Datlow and Windling's picks of the previous year's top tales. This 16th incarnation of their award-winning anthology series shows fantasy and horror fiction alive, well and accessible in an impressively broad array of venues ranging from literary journals to genre publications, on-line markets and even a rock music tour book. The 49 selections (which also include poetry and an essay) are as refreshingly impossible to pigeonhole as their sources. Melissa Hardy's "Aquerò," a wry behind-the-scenes look at a saint's canonization, is a perfect balance of supernatural mystery and dubious demystification. Conrad Williams's "The Machine," whose characters are caught up in the inexorable natural processes of its seaside setting, is one of several stories whose surreal symbolism blurs the boundaries between horror and fantasy. "The Least Trumps" by Elizabeth Hand, centered on a female tattoo artist's shaky grip on reality, translates the iconography of tarot cards and the reader's relationship to the written word into a luminous fantasy on the interpenetration of life and art. Don Tumasonis's "The Prospect Cards" is a brilliant narrative puzzle, related as a fragmented travel diary written on the backs of old postcards, in which the missing passages cleverly suggest a horror that defies description. Five writers are represented by two selections apiece; that might have given the impression of a dwindling talent pool were the contents not so delectably varied in theme and approach, and divided judiciously between well-known writers and new names.