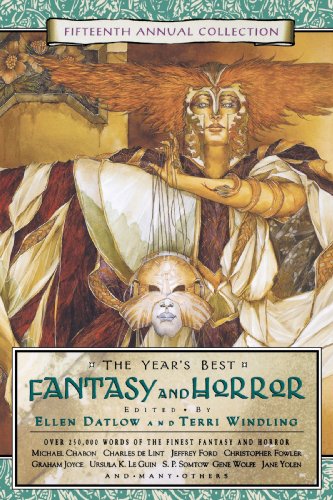 "Best" is a subjective judgment, but there's no question that for each of the past 15 years Datlow and Windling have assembled an excellent anthology of richly rewarding imaginative literature. Their harvest of horror and fantasy for 2001 is a bumper crop of 49 stories and poems, many from sources that won't be familiar to the average reader and some from newcomers whose promise bodes well for the future of both genres. As in years past, certain themes cut across genre boundaries and explode notions of horror and fantasy as separate literary forms. Shapeshifters are present in Charles de Lint's upbeat "Trading Hearts at the Half Kaffe Cafe," where they teach a lesson about trust in a romantic relationship, and in Susan Palwick's haunting "Gestella," where they crystallize the sense of estrangement in a deteriorating marriage. Ursula K. LeGuin's "The Bones of the Earth," written in the classic high-fantasy style, and S.P. Somtow's "The Bird Catcher," which features a legendary serial killer, are both moving coming-of-age parables. Intimations of realities beyond comprehension dominate Anthony Doerr's "The Hunter's Wife," a transcendent meditation on the consolations of mortality, and Caitlín Kiernan's "Onion," which brilliantly suggests a universe of chaotic cosmic horrors through the dysfunctional lives of people who have seen but not understood them. Enhancing the mix are top-flight tales by Steve Rasnic Tem, Kelly Link, Elizabeth Hand and Gregory Maguire, and Michael Chabon's "The Dark God of Laughter," a metaphysical mystery that ranks as one of the year's most refreshingly uncategorizable stories. Without question, this book is mandatory reading for lovers of weird and fanciful fiction.