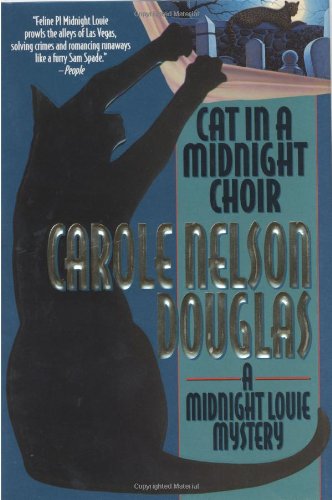 CAT IN A MIDNIGHT CHOIR: A Midnight Louie Mystery

As her 14th hip crime caper to feature Alpha cat Midnight Louie, with his cranky, Columboesque voice shows, Douglas just keeps getting better at juggling mystery, humor and romance. This one unfolds like one of those Russian nesting dolls—there's always one more question to answer. With the Stripper Killer still at large in Las Vegas, Midnight Louie's "owner," Temple Barr, discovers that her magician boyfriend, the Mystifying Max Kinsella, is a suspect. Temple's would-be boyfriend, ex-priest Matt Devine, now a radio personality, has his own troubles. The obsessed Kitty the Cutter is stalking Matt, seeking to deflower him and destroy any potential rival who gets in her way. Meanwhile, the Synth, a dangerous cult, continues to punish those who would reveal ancient magic secrets. All have a stake in discovering who's killing whom, but none more than C.R. Molina, ace police sleuth, aka Carmen, jazz diva of the Blue Dahlia. Not only is Rafi Nadir, her ex-husband (and father to a daughter he doesn't know exists), a suspect, but she's convinced that Max, Temple and Matt are all implicated in other crimes. As usual, the author ties up the loose ends only partially, while a final murder sets the stage for the next installment. Those who don't care for the fur-flying antics of talking animals won't pick up this book in the first place. Established fans will welcome another intriguing piece of the puzzle.