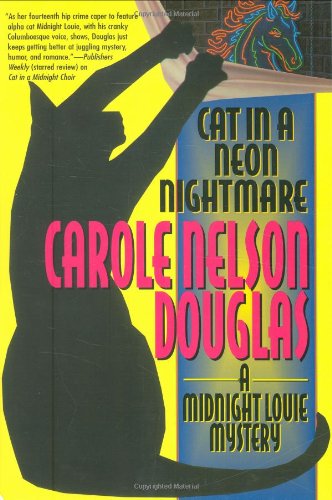 CAT IN A NEON NIGHTMARE

In the 15th entry (after 2002's ) in Douglas's sprawling serial that always leaves another murder unsolved until the next installment, that cocky cool cat and "ace feline PI" Midnight Louie and his "erstwhile daughter," Miss Midnight Louise, add their own heroics to a potent brew of who-offed-who and who-loves-who. Last time out, a Stripper Killer was caught by the Circle Ritz gang, but Kitty "the Cutter" O'Connor escaped to keep stalking the object of her affection, "Mr. Midnight" Matt Devine, an ex- but still celibate priest/radio-talk-show counselor. Here, Vassar, the high-class call girl whom Devine picked to lose his virginity to before Kitty could do the deed, ends up dead after their tryst—on a Las Vegas hotel's casino area's "clear Lexan ceiling above the neon." Crack police lieutenant C.R. Molina suspects magician/counterterrorist "Mystifying Max" Kinsella, while Temple Barr, PR whiz and friend to both Devine and Kinsella, suspects Kitty—an over-the-top evildoer also connected to Kinsella's IRA past and perhaps even to the sinister Synth, an ancient magician's association that may have been responsible for the "death" of Kinsella's old mentor, Gandolph the Great. Subsequent volumes should tie up all the loose ends Douglas leaves in this light hybrid cocktail that's shaken, not stirred—and not for those who prefer their mysteries, well, straight up and feline-free.