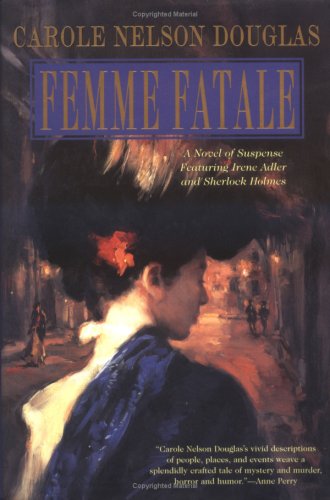 Although Irene Adler appeared in only one of Arthur Conan Doyle's Sherlock Holmes stories ("A Scandal in Bohemia"), this beautiful, intelligent and mysterious character, a Victorian woman well ahead of her time, has taken on a vivid new life in seven novels by the prolific Douglas (, etc.). In this latest frolic, an alarming letter from Elizabeth Jane Cochrane (aka Nellie Bly), an American journalist who helped Irene pursue Jack the Ripper in her two previous adventures ( and ), is enough to lure Irene and her naïve companion, Nell Huxleigh, to New York City. The New York of 1889 provides new and fertile ground for the author's imagination, as Irene searches for clues to her dimly remembered childhood and hunts a serial killer who is rapidly eliminating everyone with knowledge of Irene's past. And where Irene goes, one can also expect to find her sometime ally, sometime adversary, Sherlock Holmes. Fans will relish the ornate, elliptical language Douglas employs for her Adler novels, as well as the discovery of fresh bits of her heroine's biography. Book groups will welcome the reader's guide at the end.

Cat in a Neon Nightmare