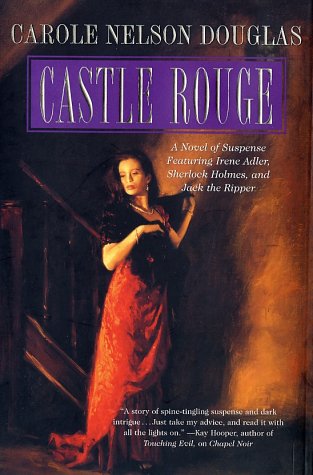 A direct sequel to (2001), Douglas's exuberant sixth novel to feature the woman who bested Sherlock Holmes offers a novel theory as to the identity of Jack the Ripper that's sure to provoke controversy among those devoted to the study of the most notorious serial killer of all time. The Ripper's bloody killing spree has apparently spread throughout Europe and may be connected with bizarre, violent sexual rituals performed by mysterious cultists. Adler's husband, as well as her closest confidante, Nell Bly, have disappeared, and the story alternates among various perspectives: Dr. Watson's, Nell's and that of an unknown figure whose identity is revealed only at the end. Holmes and Adler pursue separate lines of inquiry, but are off-stage for much of the book, leaving the annoying Nell, a fainting, repressed damsel in distress, as the most dominant voice. The frequent changes in locale from England and France to Bohemia and Transylvania, with each country vividly portrayed, help to speed along the plot. Dracula fans will be pleased to find Bram Stoker playing a role. Clichés such as "filthy minions" and a shortage of meaningful detection may put off some readers, but those who relish lots of action, including chases and close calls, will feel amply rewarded.

Cat in a Midnight Choir