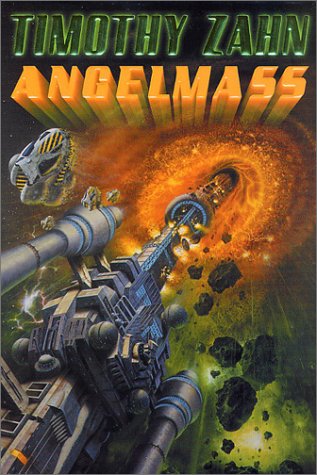 Hugo winner Zahn ( and numerous Star Wars novels) offers a satisfyingly complicated story of an alien force, Angelmass, that has for decades been spewing off particles called Angels, which have power over human behavior. Angelmass has become a significant part of the governing structure of one interplanetary system, the Empyrean, and a source of concern for its legendary enemy, the Pax Comitus. A series of marginalized characters contends with its social effects and other properties: Jereko Kosta, an academic researcher into atomic physics trained as a Pax spy; Chandris Lalasha, a highly skilled thief who is escaping a dangerous lover and hoping for a big score; High Senator of the Empyrean, Arkin Forsythe; and Forsythe's aide, Ronyon. Forsythe is ostracized because he doesn't like the Angels that all senators are supposed to use, Ronyon because he is mute and of low intelligence. Predictably, these individuals become the heroes of the story, willing to pursue unpopular scientific theories (Kosta opposes Pax and discovers important information about Angelmass), to sacrifice their goals for others (Lalasha learns to help her friends, personal and intergalactic) and to question official scientific and governmental opinions. Through in-depth characterization, as well as toothsome scientific and political mysteries, Zahn unfolds an intricate tale of adventure sure to please his many fans.