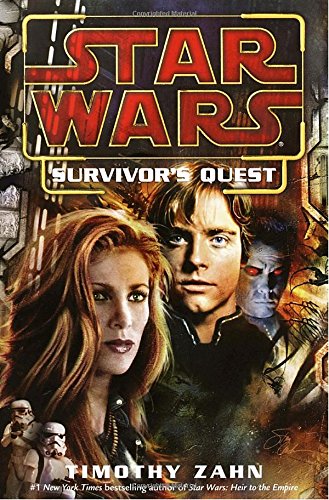 Hugo winner Zahn, author of five previous Star Wars novels ( , etc.), serves up another G-rated crowd-pleaser in the bestselling franchise series. Regulars will recognize the cast, but newcomers may raise an eyebrow to learn that Luke Skywalker, whom they lovingly left as a youth on a screen in a galaxy far away, is now a married man. His wife, Mara Jade, is, however, no simple suburbanite clutching little Skywalkers. Having spent her early years innocently supporting a dictator, she now flies beside her husband, content to swap technological chitchat instead of romantic twaddle. She is, after all, a Jedi Knight, the equal of her Master Jedi husband and just as handy at wielding a blazing light saber. The alien Chiss, inadvertently or otherwise, have shot down Outbound Flight, the fabulous lost group of super dreadnoughts bearing more than 50,000 people into the most distant reaches of space, a scenario reminiscent of Robert A. Heinlein's classic , if without the cosmological wonder. Now, half a century later, many species have assembled to locate the wreckage. To their surprise, when they discover the remains, survivors uninterested in being saved inhabit them. To no one's surprise, Luke and Mara are up to the situation's needs. Full of action and more twists than a corkscrew, this stand-alone SF adventure novel is sure to satisfy its target teen audience.