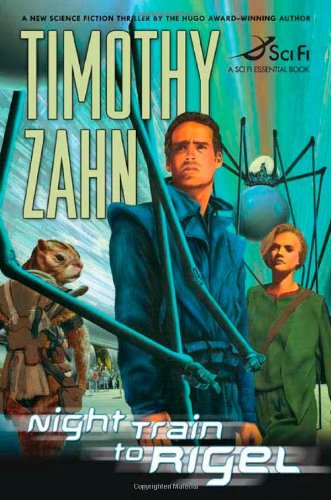 Hang on! Hugo-winner Zahn ( ) takes off on a rip-roaring interstellar train ride with hard-boiled hero Frank Compton, recently fired from Earth's Western Alliance Intelligence for whistle-blowing on the costly Yandro colony boondoggle, a U.N. scheme to make humanity a real interstellar power. From Earth's mean streets, Compton hops the Quadrail, a mysterious galactic system run by the alien Spiders, who give him four months to defuse an interstellar war being engineered by the gestalt entity the Modhri. With Bayta, "The Girl" sent by the Spiders to recruit him, Compton blasts his way through layers of subterfuge and teams of unpronounceable alien baddies. Seeing a new chunk of the truth fall into place about every hundred pages, Compton carries comic-strip action to dizzying extremes in this highballing romp. Situations predictable from tough-guy PI fiction and characters straight out of Dick Tracy (even though some wear chipmunk fur and others inhabit telepathic coral colonies) make this night train a juicily familiar joyride. (