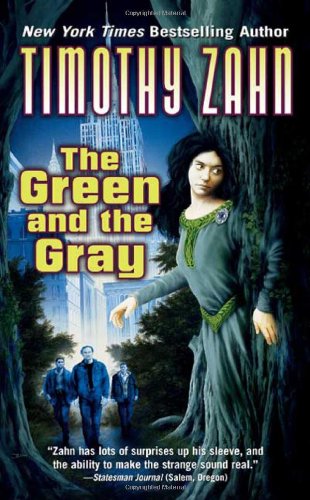 THE GREEN AND THE GRAY

Like its title, Zahn's urban drama of a New York City couple fighting to save both their beloved city and an odd child thrust into their care is understated yet compelling. What starts out for Roger and Caroline Whittier as another evening full of bickering and resentment turns into something otherworldly after they, not the criminal who tried to strangle her, take possession of mysterious 12-year-old Melantha Green. One strange event after another follows: the girl melts into the potted orange trees on the Whittiers' balcony; invisible men climb the sides of buildings; and everywhere he goes, Roger is accosted by various factions of "Greens" and "Grays." Each group claims that a civil war is brewing in the parks of Manhattan and that it will be averted only if Melantha is turned over to them. An NYPD detective—sent to investigate a double break-in at the Whittier's apartment—gets dragged into the action when he just can't let go of several inexplicable loose ends. One nice touch in this highly enjoyable hybrid of SF and mystery is that at no point does any one character know exactly what's going on. As the further mark of a mature writer, Zahn ( ) portrays a realistic marriage in which it takes more than magic to resolve conflicts.