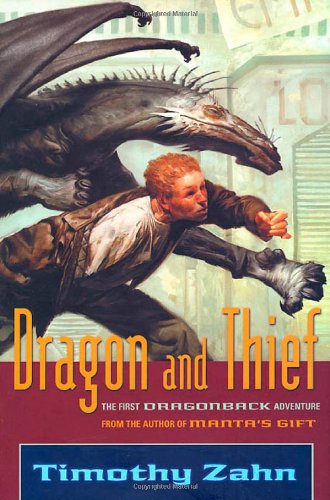 DRAGON AND THIEF: A Dragonback Adventure

Less complex than such recent novels as and , this start to a new SF adventure series from Hugo Award-winner Zahn will appeal largely to younger readers. Fourteen-year-old orphan Jack Morgan, former small-time thief, is on the run, framed for theft from megacorporation Braxton Universis. Hiding out on an unoccupied planet, his only companion an artificial intelligence programmed with the personality of his con man uncle Virge, Jack witnesses a battle between incoming spaceships. While looking over the wreckage, he meets Draycos, a dragon-like K'da, sole survivor of an advance team of K'da and their Shontine allies—murdered by their enemies, the Valahgua, with a terrible energy weapon called "the Death." With Valahgua-backed mercenaries searching the planet for survivors, Jack and Draycos work together to escape. Despite Virge's continuing doubts, Jack agrees to help Draycos find out who betrayed his people; but first they must prove Jack's innocence and get the police off his back. Along the way, each will earn the other's trust as they learn to work together as a team. Zahn keeps the story moving at a breakneck pace, maintaining excitement even when the plot becomes clichéd.

Heir to the Empire.