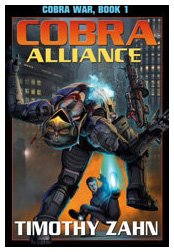 Zahn's Cobras (last seen in 1988's ) deliver superb action and jolting interplanetary plots that almost compensate for conventional characters and well-worn motivations. The alien Trofts have been docile for decades, and the leaders of the Cobra Worlds are starting to wonder whether the nanotech-enhanced Cobra warriors are necessary. Mistrust and fear of the Cobras is burgeoning when a strange message summons second-generation Cobra Jin Moreau Broom and her older son, Merrick, to defend the quasi-Islamic planet Qasama against invading rogue Trofts. Naming the Cobra Worlds after Rome's hills, Zahn emphasizes the stern values of duty, honor, planetary group, and suggests that peace comes only through oft-displayed strength. The rough-and-tumble combat crackles like fingertip laser implants and plays off against Qasaman intrigue, and the psychological tensions surrounding Jin's aging and illness make this a rousing start to a new Cobra trilogy.