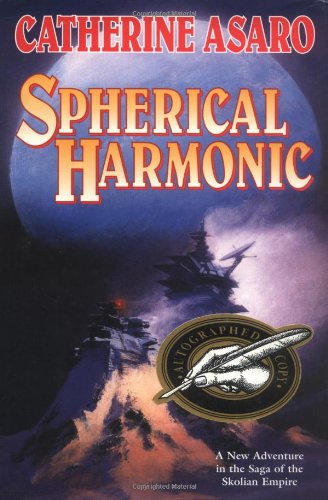 This fast-paced entry in the Saga of the Skolian Empire (; ; etc.) provides a backstory with plenty of battles and political machinations that will no doubt delight fans of the series, but may leave others scratching their heads. We follow the flawless and very powerful Dyhianna Selei, after she wakes up on the moon Opalite, as she slowly regains her memory and seeks to be reunited with her husband and son—no easy task, as her husband has been captured and enslaved while her son has disappeared into psiberspace, perhaps forever. Psiberspace, which links together the commerce of several star systems, is down, and suddenly everyone is jockeying for power—Dyhianna, unwillingly, among them, as her family becomes a rallying point for followers dissatisfied with the status quo. A coup places Dyhianna in power as both the reigning Pharaoh of the Ruby Empire and as the leader of the representative Assembly, an unprecedented sociopolitical change with far-reaching implications. Her quest to regain missing family members takes her to Earth, where the presence of her fleet threatens the volatile relationship between the Skolian Imperialate, which Dyhianna now leads, and the Earth Alliance. Asaro, a physicist, weaves scientific descriptions of Kyle space, spherical harmonics and orbitals with fantastic elements of psychic powers and mental telepathy. Science and fantasy make an uneasy mix here, but underpinning and transcending both are complex interpersonal relationships that center on love and loss.