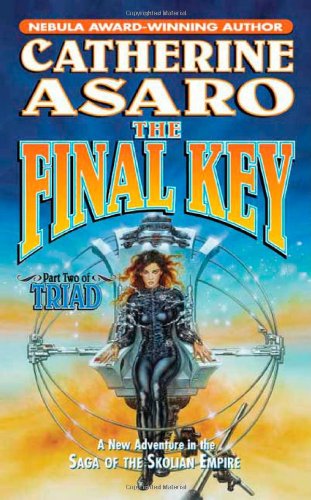 Given the complex world within Asaro's Skolian Empire saga, perhaps it's forgivable that the first third of her second Triad fantasy (after 2004's ) explains at tedious length the history of the Ruby Dynasty, a ruling tribe of telepaths who struggle with discord among themselves even as they fight off their dire enemies, the Euban Concord. Readers of this extensive chronicle will happily plunge back into the fray, but newcomers might stumble, feeling much like first-time viewers of a byzantine space soap opera. However, once the action heats up with an assassination attempt that disables the head of the Ruby Dynasty, rapid pacing and gripping suspense whisks away any confusion. Young Soz, an heir to the throne and a military cadet, seizes the book's spotlight with her combination of vulnerability and bravery as she steps up to responsibility. But with so many characters, this tale suffers from a lack of focus. Asaro's saga is a monumental work, but only a more careful honing of the individual novels will make the series masterful.