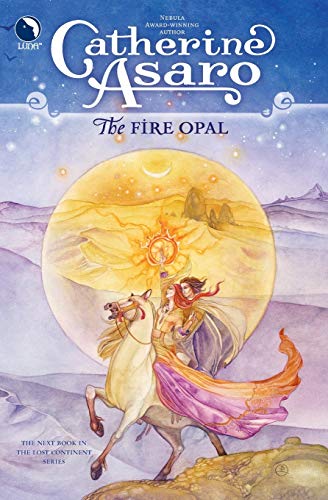 Nebula-winner Asaro offers a tasty mix of love, action and intrigue in this romantic fantasy set in the same world as The Misted Cliffs (2005). Ginger-Sun, an innocent young priestess in the Dragon-Sun temple outside the village of Sky Flames, finds her loyalty to her people torn when a mysterious stranger is found badly injured outside of town. Using the fire opal gem her foreign grandfather gave her long ago, she’s able to heal the stranger, a handsome soldier named Darz Goldstone who comes from the “splendorous city of Quaaz.” But because such magic is taboo, Ginger-Sun is found guilty of witchcraft. Rescued from a terrible death by fire, Ginger-Sun must leave everything she knows and, with the guidance of a vision of the Dragon-Sun, trust that marrying Darz—and learning to accept her magical ability—is the right thing to do. Once again, Asaro skillfully blends romance with a solid fantasy scenario. (July)