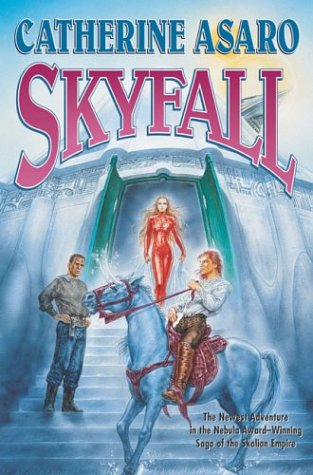 Intrigue, drama and romance converge in Nebula winner Asaro's latest Skolian Empire adventure (after 2003's ), an enthralling stand-alone that fills in the early history of the empire. Married and a widow twice over, Roca is not only the heir to the Ruby Dynasty's pharaoh, Lahaylia Selei, but also the Skolian Empire's foreign affairs councillor and an unwilling pawn in her son Kurj's efforts to rid the empire of its enemy, the sadistic Aristos. In a bid for freedom from her overbearing, manipulative son, Roca escapes and finds herself marooned on a backwater planet, Skyfall, whose inhabitants have mysterious genetic traits that connect them to the Ruby Empire of long ago. Roca becomes the hostage, captive, confidant, lover and finally wife of the bard Eldri. Though their technology is primitive, the inhabitants of Skyfall have a no less advanced society than her own. Eldri teaches Roca to trust men again, and in the end, to find a love that can surpass the demands of her position as heir to the Ruby throne. Some SF fans may be disappointed to find so little of the physics the author, a former physics professor, usually puts into her books, but romance readers will have no cause to complain.