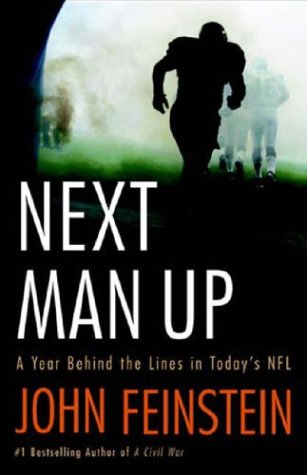 Next Man Up: A Year Behind the Lines in Today's NFL

According to the punchy start of this sprawling, in-depth account of the 2004 Baltimore Ravens' season, you can forget about all the other pretenders to the throne: pro football is (at least in and around cities that have a franchise) America's sport. Furthermore, Feinstein, bestselling author of , persuasively argues that pro football is the most dramatic American sport, with its many deeply religious players, limited media access and comparatively low number of games, which are all then accorded life-or-death status. Given excellent access to the Ravens operation, Feinstein is, not surprisingly, very generous with his subjects, painting evenhanded portraits of the players (many of whom, like Jamal Lewis and Deion Sanders, have had plenty of bad press over the years) and even more neutral portrayals of management, especially coach Brian Billick. The runup to the first game of the young franchise's ninth season is so assiduously documented, the season itself is almost an afterthought, though the games are smartly and excitingly rendered. Feinstein wisely avoids the grandiloquent hyperbole often found in sportswriting; there are no references to deities or Greek heroes here. This hefty tome will surely keep football fans happy between games. .