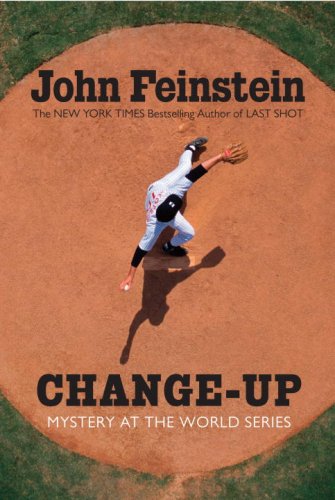 Change-up: Mystery at the World Series

Feinstein's fourth mystery starring teen reporters Stevie Thomas and Susan Carol Anderson veers into fantasy—the Washington Nationals (currently with the worst record in Major League Baseball) are in the 2009 World Series. As in the previous books, the play on the field serves as backdrop for Stevie and Susan's adventures in journalism. This time, they stumble into an investigation of a journeyman pitcher, Norbert Doyle, who is starting game two against the Red Sox without ever having recorded a major league win. Before his meteoric rise, the career minor leaguer sat for an interview with Stevie and Susan, during which he revealed a tragic incident from his past. But now that Doyle is the story, his version of events is falling apart. Relying more on luck than shoe leather, the junior sleuths unravel a convoluted tale involving charges of marital infidelity, drunk driving and corrupt police. Sports fans will enjoy all the trivia Feinstein works into the narrative, but his habit of having real-life sports stars make cameo appearances can be problematic—three of the Nats mentioned by Feinstein are already gone, including manager Manny Acta, who was fired in July. Ages 10–up.