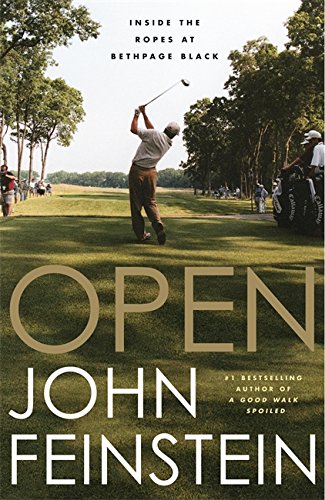 OPEN: Inside the Ropes at Bethpage Black

Feinstein () chronicles the years spent renovating "chewed-up" Bethpage (N.Y.) Black for the first-ever U.S. Open held on a municipal course—and the biggest ever net profit, at $13 million. Many of the behind-the-scenes people he describes (such as former U.S.G.A. president David Fay), though colorful—and colorfully drawn—don't quite pull readers into the 2002 event. Feinstein swings for significance, too, complete with references to September 11, which seldom land near the flag of portent. But unlike his earlier golf bestseller, crossover appeal fades fast. His account is impeccably researched and written with you-are-there clarity, yet the buildup stretches over three-quarters of the text, leaving the best for last but not rewarding readers' patience. Successive chapters—"Countdown," "Last Rehearsal," "Final Preparations," "D-Day"—keep putting off the moment until late in the book when Feinstein writes, "It was time to start playing golf." The skirmishes over which network gets broadcast rights or how 42,000 spectators can be accommodated just don't excite the way a neck-and-neck round does. With so many anecdotes devoted to politics and economics, even devotees may skip ahead to the later chapters centering on Tiger Woods, as the narrative fails to generate much game of its own.