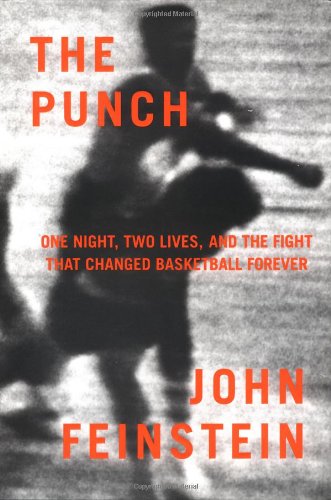 THE PUNCH: One Night, Two Lives, and the Fight That Changed Basketball Forever

Feinstein's latest (after ) tears the scab off one of the deepest wounds in the history of professional sports. In 1977, during a Lakers-Rockets match, L.A. forward Kermit Washington forever altered the course of his career and that of Houston's Rudy Tomjanovich when he threw a punch that nearly killed the Rockets' captain. From that moment on, each man's life became defined by the incident and its aftermath. Seamlessly weaving the event itself into the fabric of pro basketball's rocky pre–Magic/Bird/Jordan history of constantly relocating franchises, dismal television support and chronic violence, Feinstein tells a moving story of two men branded by a moment frozen in time, and how the incident changed the game it could well have destroyed. The narrative never gets mired in the fawning sycophantism of many sports books or the moral proselytizing of many others. Feinstein's research is sharp, and his time line jumps around effortlessly, like a good Quentin Tarantino film. Most importantly, the author sustains the balance between Washington's burden of guilt and the genuine misfortune that has followed him since. He's a sympathetic character, almost uniformly described as a smart, good-hearted man bearing the never-healing scar of the one great mistake in his life. Yet he is by no means the saint he might have us believe him to be. Feinstein's portrait of each man is compelling; neither is lionized or demonized. Rather, the complexity of the incident and the depth of the personal trauma for both Tomjanovich and Washington fester under the author's microscope in this excellent and engaging book.