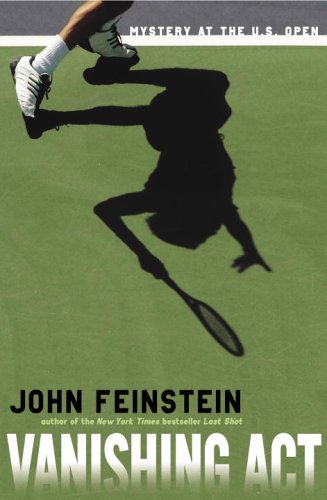 The teen reporters who uncovered scandal at college basketball's Final Four in wangle new assignments to cover the U.S. Open tennis championships. Stevie Thomas and Susan Carol Anderson find themselves pulled into investigating the disappearance of Nadia Symanova, a Russian with a powerful forehand and supermodel looks. Despite the onslaught of media that converges on Queens, it takes the two 13-year-olds to untangle the mystery, and uncover the corruption fueling it. Sportswriter and adult novelist Feinstein ( ) delivers a name-dropping, insider account of professional tennis politics—TV announcer Bud Collins is a character—and does not pull his punches. "Agents are responsible for most of the ills of tennis, and the ills of tennis are endless," his Collins says—and those ills apparently include tennis prodigies who forfeit their education to pursue million-dollar shoe contracts, and players who shriek when striking the ball. Sports agents come under the harshest scrutiny. There may be a lot of commentary here, but the tension continually escalates, and ends with a hint of romance between the protagonists that suggests at least one more adventure for Susan Carol and Stevie. Ages 10-up.