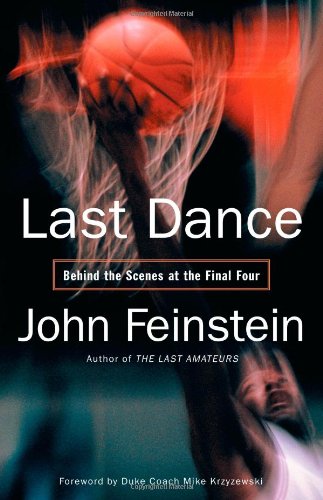 Last Dance: Behind the Scenes at the Final Four

Feinstein is turning out the sports books faster than ever, as his whirlwind tour of the NCAA college basketball tournament follows quickly on the heels of his fall 2005 look at pro football, . Maybe that explains the somewhat rushed feel, as Feinstein skips briskly from one anecdote to the next. In his effort to depict the annual climax of "March Madness" from as many perspectives as possible, Feinstein collects stories from coaches, players, referees, sportscasters and others, more often than not finding the positive angle. Even Terry Howard's missed free throw during a 1975 semifinal game is turned into a reflection on what an honor it is just to be able to play in the Final Four. The closest Feinstein comes to controversy is when he criticizes the NCAA's recent decision to add a 65th team to the tournament. The account of last year's battle between Illinois and North Carolina for the championship is largely perfunctory; Feinstein is clearly much more interested in revisiting the past with coaching legends like Dean Smith and Mike Krzyzewski (who also supplies a brief foreword). Then again, in all likelihood, so are most readers. 8 pages of photos.