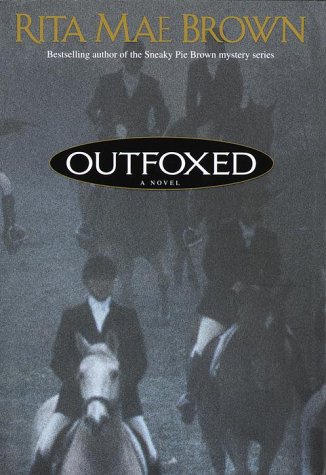 Set in Virginia's foxhunting country, Brown's latest, anthropomorphic mystery will appeal mainly to devoted fans of her animal-centric Sneaky Pie novels (Cat on the Scent, etc.). Jane Arnold, septuagenarian master of the venerable Jefferson Hunt, is preoccupied, Lear-like, with the question of succession. Whom should she train as joint-master of the foxhunting club: the philandering lightweight Fontaine Buruss, or the philistine Yankee millionaire Crawford Howard, who promises to save the club from financial ruin? While the two unworthy candidates vie shamelessly for the post, Jane (known locally as Sister, despite her matriarchal stature) must also cope with the personal travails of other club members, especially the Franklins, whose two beautiful daughters have become ""coke whores."" Then, in the middle of the season's opening hunt, Fontaine is found murdered, a fate that rattles Sister not half so much as the simultaneous discovery of a murdered red fox. As the foxes note appreciatively in their subterranean parallel universe, ""Sister is one of us""; they also pontificate on human nature, the environment and other species (""Groundhogs have no sense of aesthetics""). Horses, foxhounds and Sister's pet cat Golliwog also hold forth for chapters at a time (Golliwog on why she reads Sister's books: ""It's the best way to enjoy an uninterrupted conversation with the best human minds from any century""). Brown, herself a dedicated Virginia foxhunter, clearly knows her fascinating terrain, as well as her steely, charismatic protagonist. But few grown-up readers will buy her depiction of the animal kingdom as a benign world in which furry critters chatter philosophically, while bumbling humans commit savage acts. Author tour. (Jan.)
close
Details