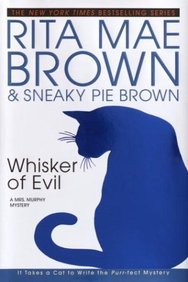 Bestseller Brown ( , etc.) and her feline collaborator offer another winsome tale of endearing talking animals and fallible, occasionally homicidal humans, many of whom breed and raise horses in the small Piedmont town of Crozet, Va. Near Potlicker Creek, postmistress Mary Minor "Harry" Haristeen and her pets—corgi Tee Tucker, tiger cat Mrs. Murphy and fat, gray kitty Pewter—discover 34-year-old breeder Barry Monteith, "fit, handsome... and fun-loving," on the ground, his slashed throat gushing blood. "Death, often so shocking to city dwellers, was part of life here in the country." Later, Harry resigns in a pique when the overzealous, obnoxious animal-control officer prohibits her pets from the post office. A reawakening of affection for Fair, her former husband, and the building of an addition to her barn complicate things further. Her animals figure she's too distracted when Harry misses vital clues to Barry's murder—and to the peculiar death of a second young breeder. The mystery thickens with a strange case of rabies that brings on the state health inspectors as well as the media. Brown perhaps overdoes the details of horse breeding, record-keeping and rabies, but fans are sure to cheer as Tee Tucker, Mrs. Murphy and Pewter rush to their mistress's rescue at the harrowing climax. Illustrations by Michael Gerraty not seen by .