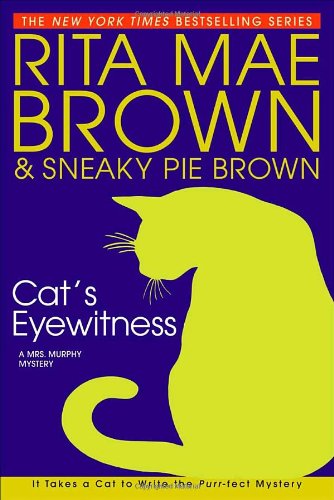 The 12th novel in this bestselling cozy series from Brown and her feline collaborator (after 2004's offers the usual irresistible mix of talking animals and a baffling murder or two. After she decides to quit her job as the Crozet, Va., postmistress because her animal companions—cats Mrs. Murphy and Pewter and corgi Tee Tucker—are no longer permitted to accompany her to work, Mary Minor "Harry" Haristeen and best friend Susan Tucker retreat to a Blue Ridge Mountains monastery, where a statue of the Virgin Mary suddenly begins to bleed from the eyes. This curiosity, which attracts national media attention after a local reporter, Nordy Elliott, files a short piece on it, becomes more of a concern when Susan's beloved great-uncle, a monk, turns up dead at the foot of the statue. While Harry, her two cats and her dog investigate, Elliott becomes the next murder victim, in a symbolic manner linked to the supposed miracle. Though the culprit's identity is fairly obvious and some exposition borders on the simplistic ("If a person's last name began with 'A,' their large package would go on the 'A' section," we learn as Susan sorts packages at the PO), the animals' wry observations on human nature and beliefs amuse as ever. Michael Gellatly's charming illustrations perfectly complement the text.