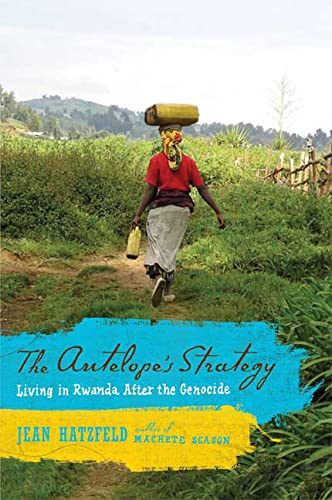 The Antelope’s Strategy: Living in Rwanda After the Genocide

The horrors of communal violence give way to quieter torments in this harrowing collection of oral histories. Hatzfeld revisits Tutsi survivors and confessed Hutu killers he interviewed in and after the latter were unexpectedly released from prison and returned to their homes.. The official Rwandan policy of reconciliation holds: Hutu-Tutsi relations are civil, and one even marries a Tutsi woman whose relatives were slaughtered. But to Hatzfeld, the survivors reveal inner scars—their unappeasable sense of grief, dispossession and mistrust of their neighbors, the fillip of fear whenever they encounter Hutu farmers carrying their machetes, the bitterness that justice has been sacrificed for national recovery. (Less anguished, the pardoned Hutu perpetrators express a diplomatic repentance and relief at having escaped retribution.) Hatzfeld includes nightmarish scenes from the genocide; survivors recall running for their lives for weeks on end, regressing to the status of game animals as Hutu hunting bands cut down their families and friends. Just as haunting is the spiritual aftermath: “ 'I believed in honorable effort, decent behavior, the straight and narrow path,’ ” one Tutsi woman recalls, “ '[but] from now on, I’m suspicious of moral maxims.’ ”