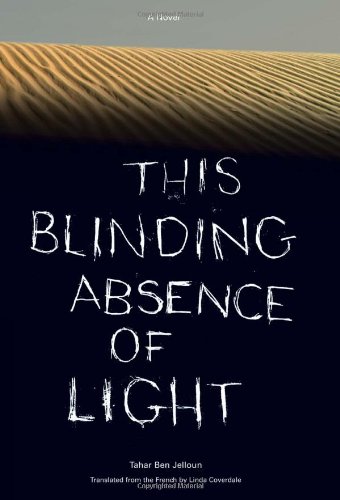 THIS BLINDING ABSENCE OF LIGHT

Based on an incident involving starvation and torture in Morocco, Prix Goncourt–winner Jelloun's latest novel is a disturbing, grisly account of how a prisoner survived a 20-year internment in which he was locked away in a desert tomb. The narrator, Salim, was captured during an unsuccessful 1971 attempt to overthrow Prince Hassan II, who then secretly sent his enemies off to an isolated, makeshift prison. The conditions approached the horror of a concentration camp: the prisoners were confined in dark, cramped chambers, fed a subsistence-level diet and given no medical attention. They were allowed to communicate, however, which helped them cope with such ghastly tortures as having scorpions thrown into their cells. In one particularly hellish incident, a prisoner who breaks his arm is devoured by gangrene and cockroaches. Jelloun writes eloquently and poignantly about the prisoners' various coping tactics, from Salim's recitation of half-remembered stories from and scripts from American films to a memorable section in which a dove lands in one of the cells and is passed from inmate to inmate. Freedom eventually comes with bribing a guard, resulting in the intervention of activists from Amnesty International, but this harrowing tale of deprivation and degradation is a frightening reminder of man's seemingly boundless capacity for evil.