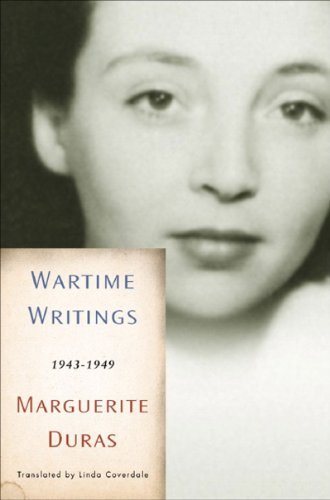 This engrossing volume of newly published material from French novelist and memoirist Duras's wartime notebooks contains writing as roiled and violent as the years that produced it. Selections range from novella-length down to paragraph- or sentence-long fragments and include stories, polemics, notes and even an ad for a maid; the mix of fiction and nonfiction lets us follow characters, events and themes from Duras's autobiographical writings through various drafts into fictional form. Landmarks include her memoir of youth in Indochina in an impoverished, déclassé French family—beaten viciously by her mother and brother, then embarking on an affair with a repulsive, wealthy Vietnamese man who seems her only ticket out; this supremely rancid vision of colonial rot would become her celebrated novel . Duras's experiences in the French Resistance yield harrowing stories about the torture of a suspected collaborator, and several nonfiction pieces recount her agonizing wait for her husband's return from a German concentration camp at war's end. Even her quieter writings have an edge to them, as in a study of early morning street life in front of her apartment that sparks a meditation on class warfare. Duras's fans will recognize and thrill to her unique voice as it develops—feverish, sometimes feral, yet pitilessly unsentimental.