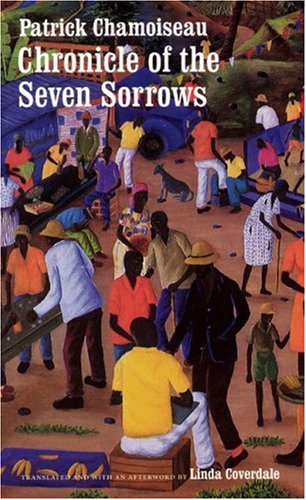 Chronicle of the Seven Sorrows

Published in France in 1986 and appearing in the U.S. for the first time in Coverdale's excellent translation, Chamoiseau's first novel, written before Texaco, is an astonishingly assured piece of work. Famous for rejecting the Negritude style of writing, with its combination of leftist sentiment and archly Parisian French, Chamoiseau instead salts Creole narrative styles with vernacular phrases and riddles, songs and occult stories. Narrated by the departed spirits of the djobbers--independent haulers of goods--of Fort-de-France, Martinique, this novel, set between the 1940s and the 1970s, tells the story of master djobber Pipi. Born to Mam Elo and a dorlis (a kind of incubus), Pipi grows up in the streets of Fort-de-France. His first job, in the time of Vichy France, is transporting Gaullist Martinicans to British Dominica. He and his partner, Gogo, generally drop them in the drink, however, which backfires one night. When Pipi makes it back to land alone, he gives up his oars for a wheelbarrow. Crowned king of the djobbers for his knowledge of shortcuts and traffic, which he demonstrates in a race to transport a country vendor's giant yam, he is nevertheless unable to win Anastase, the beautiful daughter of a master of the martial dance called laghia, and he drinks himself into the gutter. Then he gets the gold bug, and takes up a vigil over the grave of a famous zombi named Afoukal, who supposedly guards a jar of gold. Through Afoukal, Pipi channels the African spirit of Martinican history. An immensely engaging comic figure, Pipi is the catalyst for a host of interlocking stories involving everything from gravedigging to Aim C saire. This hallucinatory, bottoms-up account of modern Martinique is a tour-de-force of nonlinear storytelling. Notes. (Nov.)
close
Details