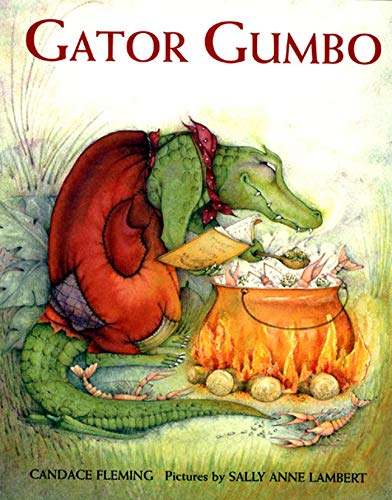 Until its rather shocking ending, this humorous picture book with its Cajun-flavored language and sly watercolors, contains many ingredients found in traditional tales. Like Br'er Rabbit, Possum pretends to be scared of aged Monsieur Gator as he taunts, "Puhleeze, don't eat me!" Reminiscent of The Gingerbread Man, Fleming's ( ) three villains chant: "Try, try, as hard as you can! You can't catch us,' cause you're an old man!" And like the barnyard animals in The Little Red Hen, Mademoiselle Possum, Monsieur Otter and Madame Skunk all refuse to help as Monsieur Gator chops and peels the ingredients into the cauldron to make gumbo. The wily alligator lures the mischievous animals closer and closer to the pot until "Slurp! Slip! Plop! Them animals go into the pot" and he eats them, "Mmm-mmm!" Dynamic and full of atmosphere, Lambert's ( ) pictures start out showing the alligator as victim and emphasizing the nastiness of the trio's pranks (they pelt him with eggs, sticks and stones), the lushness of the bayou setting only slightly vitiating his misery. But given that these animals are smaller, younger and come to look more innocent than the increasingly squinty-eyed, sneaky Monsieur Gator, it's also likely that the audience will have identified with them. Although kids may wish for the characters' comeuppance, the bad guys haven't been bad enough for their demise to be satisfying, and the comedy isn't broad enough to make the final joke all that funny. Ages 4-8.